If we ever make contact with an alien being from another universe far away from us, communication and more specifically the definition of right and left would be one of our first issues to overcome. Assuming that we both have access to a laboratory we could describe him to perform the wu experiment. In brief: Wu and her colleagues used cobalt-60 atoms held in magnetic fields at very low temperatures. Cobalt-60 nuclei have an intrinsic spin—the quantum equivalent of angular momentum.They also emit beta particles as they decay. The idea was to use the magnetic fields to orient the nuclei so that all the spins were in the same direction, and then count how many electrons were emitted up and down as the nuclei decayed. The result was that there were not equal numbers of beta particles emitted in both directions, showing that nature has a slight preference for the left. The outcome of  the Wu experiment proved the fall of parity which Wu had predicted and changed the world of Physics forever.

So, if we told our alien that the direction where the most  beta particles emitted is left we would have  managed to communicate left/rightness.  If the same experiment is done on anti-matter, then the results are reversed.  So, say you run the experiment and find out the same results as the alien then you shouldn't invite him to your planet because he is made out of anti-matter and bringing anti-matter and matter together results in the complete annihilation of equal amounts of both, and the release of all of their energy (which is a lot). 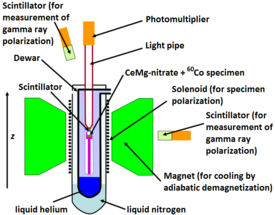